If I told you that I almost forgot what it felt like to write this article would you believe me? After an incredibly long break from UFC events we are finally back for UFC Vegas 67, and this slate has some absolute bangers on it for our enjoyment! We have some amazing wrestlers for the DraftKings guys, a few very dangerous finishers for the FanDuel guys, and lines that have been nothing short of insane for the sports betting guys.

In this article I am going to bring your attention to three fights that you should definitely be looking to target for your UFC Vegas 67 FanDuel lineups. Picking the winning side of these fights is easier said than done, but homing in on the fights you should be targeting for big scores is a huge step in the right direction.

Below you will see my recommended fights to target on the FanDuel slate for UFC Vegas 67. If you have any questions please don’t hesitate to tweet @WeWantPicks on Twitter and they will definitely get back to you ASAP.

This fight is destined to end early. Both of these guys are powerhouses that look to handle their business as early as possible. For us daily fantasy players, that means big scores. No matter which side you are on, you will want to use this fight on your entries – all of them.

Abdul Razak Alhassan is a powerful striker that can end a fight with a single connection. The issue is that he knows that too and often settles for striking when he is really capable of a lot more. Alhassan is very likely the more well rounded fighter in this contest and if he could be trusted to utilize all of his tools would probably be a significant favorite. Unfortunately he cannot be trusted in that sense, and most times is very comfortable to settle in for a fire fight. Bad for Alhassan, great for our DFS score.

Claudio Ribeiro is making his official UFC debut coming off of a contender series knockout win that took just four significant strikes – two of which were leg kicks. Ribeiro comes with immense power, and when that power connects bad things happen for the target. Ribeiro can be taken down, but he doesn’t settle for being on bottom and works aggressively to get back up in that scenario. He would very much be described as a kill or be killed fighter.

Ultimately for me when making a pick here it comes down to career trajectory. Ribeiro is on the way up, and Alhassan is stagnant at best, or on a skid downward at worst. My choice for single entries would be Riberio, but for multiple entries you are going to want to be split evenly between these two with an insane amount of exposure to this fight as a whole.

Next up is a pretty one sided affair looking from the outside in. This fight pits Mateusz Rebecki against a short notice opponent in Nick Fiore. Rebecki’s original opponent, Omar Morales, withdrew due to injury.

Mateusz Rebecki is a grappling phenom, who is highly skilled and capable of ending a fight in a variety of ways. He likes to close distance with heavy bombs and uses them to get close enough to secure his opponents legs. Once he has the legs he generally starts to fight his fight, which involves getting his opponent to the ground and hunting for the finish. If he had a question mark in this fight it would be that sometimes he can be a bit overzealous looking for a submission and gets sloppy which can lead to giving up his position.

Nick Fiore is a solid grappler in his own right, but whether or not his level rises to the UFC level remains to be seen. The issue for Fiore is one that affects plenty of grapplers, while he has good BJJ, he struggles to get the fight to a place where he can use it. That ultimately will be his undoing here in my opinion and I just don’t see much of a path for him short of catching Rebecki in something during a scramble.

Don’t bother thinking, Rebecki is the play. Not only should he be the most heavily favored fighter on the slate (he isn’t) but he is also likely to be less owned than Nurmagomedov who is right next to him with a $23 salary. For Fiore you could sprinkle him into a few lineups for multiple entry just in case, but when it comes to single entry or cash he is a firm stay away.

There were two fights that came with better lines than this one, but I was on the fence about those fights actually finishing. This one however, I am pretty confident that it will finish inside the distance. It is a rare occurrence that you can have that opinion with a Women’s MMA fight, so when it’s possible let's take advantage of it.

Sijara Eubanks is a tank for as long as she lasts. She has solid boxing despite not being known for it, and her bully game is top tier when the other woman allows it. She will look to get the fight to the ground and pound away from the top while looking for an opportunity to sneak a submission in. The unfortunate reality for Eubanks is however, she only has a round to a round and a half to make that happen before cardio issues completely decimate her.

Priscila Cachoeira is a powerful striker who has virtually no quit in her and a tremendous gas tank. She does have poor takedown defense, so she probably will drop the first round of this fight, if she can make it to round two however she will be in a good spot to win this fight.

This fight is so much closer than the odds and fantasy salaries suggest, and because of that my inclination would be to take the shot on Priscila. My head is telling me that Eubanks is going to make it tough to get out of that first round however. This is another fight where the smartest play would be exposure to both sides in your multiple entry contests. For cash I would stay far, far away from this one, and for a single entry pick the side you like best. 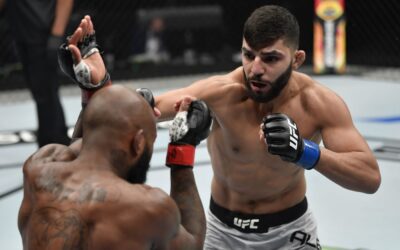 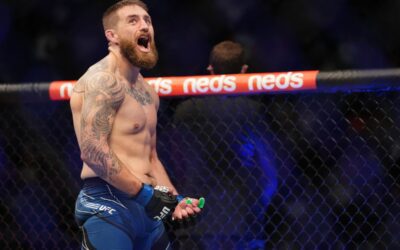