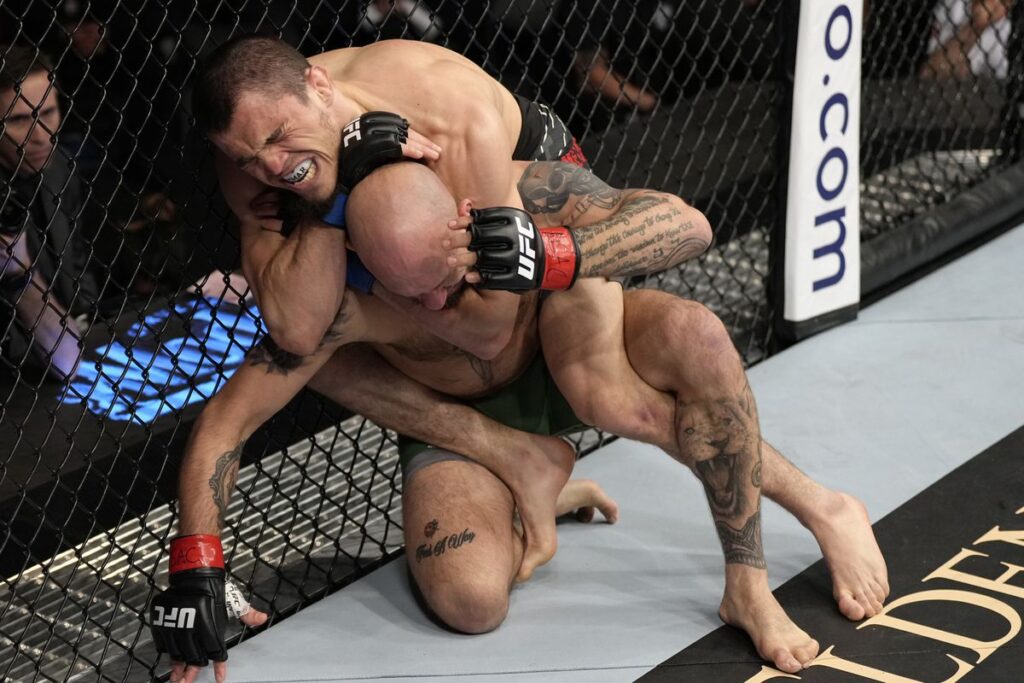 Talk about an AMAZING experience! If you missed UFC Austin, shame on you. That is all that can be said. Are you even a fan? That card went from start to finish. With eight knockouts and nine finishes out of the twelve fights, not a soul was let down by the entertainment value that event offered. From a DFS perspective, same or similar as the event. Cash games went perfect, and single entry went pretty well, and was likely just a Dolidze/Ismagulov swap away from being a takedown lineup in most single entry contests. My straight picks went 11-1 for the event, with Natalia Silva being the spoiler.

This event is loaded with wrestlers and that is both exhilarating and terrifying at the same time. My lineup could score a million points, or I could be eating hot dogs out of the trash bin behind Sonic by Sunday afternoon. Let’s hope for the former.

Below you will find my favorite plays for UFC Vegas 57, as well as some guidance as to what I am thinking about doing to fill out the remainder of my lineup. Nothing super concrete for me beyond the plays I listed below, mostly due to the delay in pricing release, but some ideas to consider in any event.

So here we go with my favorite plays for UFC Vegas 57;

This is a brain dead cash play that everyone should be making as far as I am concerned. If you play cash games and don’t use Nurmagomedov, you simply must not like money. Undefeated, chain wrestler, and huge submission upside all make this play mandatory.

For tournaments I am sure plenty of people will fade him in favor of saving some cash to move to Shavkat, Tsarukyan, or even Moises. Those people will not be me, but there will be people that do that. Nurmagomedov is more than just a cash play in my opinion, his floor is 100 points. In a great performance this might be a guy that racks up 130-140 fantasy points if Maness can manage to find his feet a time or two – unlikely – but a guy can dream.

Maness did manage to knock out Tony Gravely, and hold him to just one takedown on six attempts. Then Johnny Munoz was only successful on two of sixteen attempts. So there is precedent for Maness handling wrestlers and grapplers. I am sure analysts will jump on that. The Dagestani wrestlers are different though, and Maness won’t stay upright long.

This could be falling in love with wrestlers again, but I think this is the best play on the card for tournaments. The potential for a big score is there, and the salary isn’t that high. In a win that includes heavy wrestling, or a finish, Morozov is all but guaranteed on the optimal. Not to mention that his opponent, Raulian Paiva, has two knockout losses in his short UFC career as well. That makes the upside here tremendous.

That being said, Sergey does have an upside record in the UFC, taking two losses in his three UFC fights. Both of those losses came from submissions, but one was to Umar Nurmagomedov. In Morozov’s only UFC win he had six takedowns in a three round decision.

The potential here for a high score makes this a great tournament play in my opinion, but one that I would stay far, far away from in cash games. Paiva has beaten wrestlers before, and could do so again.

Every so often there is one fighter that it feels somewhat criminal to get at this type of price tag and Mateusz Gamrot is that fighter. I completely understand that Tsarukyan is a wrestling monster in his own right, but I can’t see him being $2000 better than Gamrot.

In an event where there are plenty of higher priced fighters that I want to play, taking the main event dog, who happens to be 20-1 and average almost six takedowns per fight, seems like the move.

I am not super confident in the outcome of this fight, but I am certain that the salary attached to Gamrot makes him almost an auto play – especially for cash, but he will likely find his way into many of my single entry tournament lineups as well.

With so many very usable fighters at the higher end of the salary matrix, and there only being one female there that I personally think could be a sneaky good tournament play, that leaves us fading a guy in the upper 8k range. In this fight I just can’t get to Bautista. His opponent is tough, and truthfully I like Kelleher to win the fight.

This fight will likely finish inside the distance, but I don’t think it will be early. Lately Kelleher has been fighting more intelligently, and at this lower weight class can be a bully against the fence if he can manage to mitigate the height and reach difference.

ROUND OUT THE LINEUP

This event is loaded with wrestlers, which makes picking lineups tough. At any moment one of these guys could go for 130 points, and then on the flip side of the coin, that same guy could score 40 points in a decision loss. The key in my opinion is going to be in picking the right wrestlers, the wrestlers that also have finish potential, and then finding your leverage somewhere along the way.

This event has one, potentially two fighters, in the 9k and up range that I just don’t see my lineup without, and that means finding a value somewhere between $7800 and Gamrot. Luckily it looks like there are at least a handful of options that look great there.

Last week’s cash and single entry did well. We didn’t take the top spot in any of the single entries, but we finished high enough to not be let down by the outcomes. Make sure to enjoy the events, that should be priority number one.

Finally, make sure to join the We Want Picks DraftKings League!