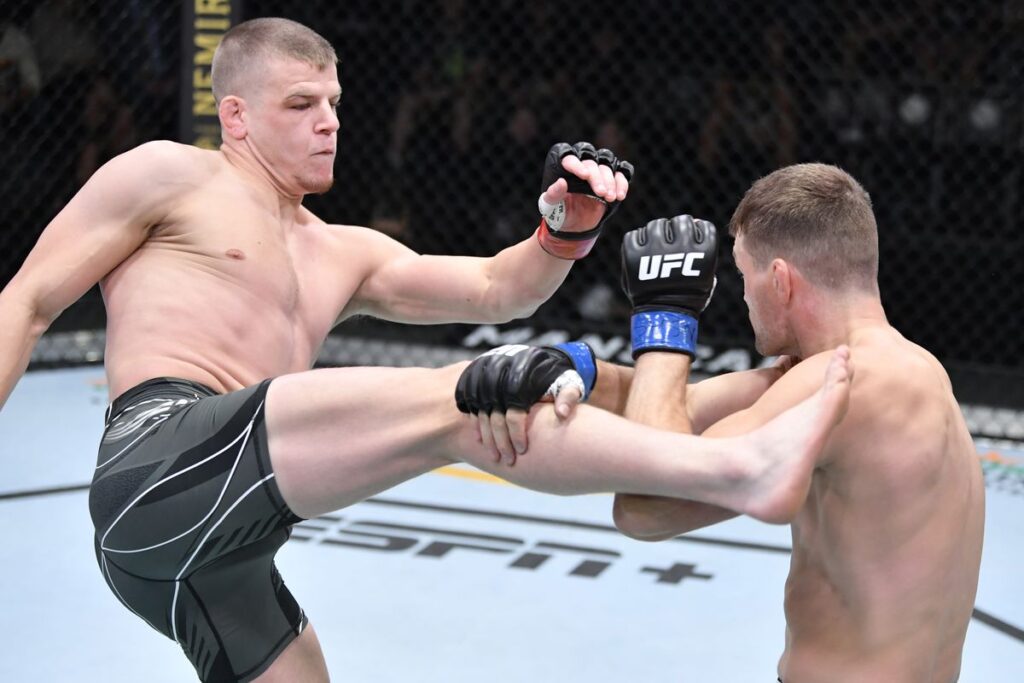 ​I am currently still licking my wounds from the last event. That was the first UFC event in a long time – maybe ever – where I actually predicted more fights wrong than I did correctly. The night started poorly with Romanov scratching, and it just continued to get worse. Regardless though, we move on to the next one.

The thing I am most excited about is that Romanov is going to be fighting this week, so at least I won’t slip into a deep UFC depression like I did this past week when it was announced that his fight wasn’t taking place. Couple that with a few more fighters that I really enjoy watching – as well as a pretty solid main event – and this event is shaping up to be a fun weekend!

So with limited continued rambling let’s get into the core plays for UFC Vegas 53 that I will be using on my lineups for DraftKings. This week is a bit up in the air again to start without Romanov on the DraftKings roster, and unfortunately with as much value as there is in the midrange I am not positive that I will be able to squeeze him back in when the dust settles this week. Here are my core plays;

I would be lying if I said I didn’t have some reservations about this pick. I truly believe that Dawson’s fight with Gordon this weekend will come down to who gets the takedowns and control time. Both are very capable in that department, and Gordon probably does hold some advantage on the feet as well.

Unfortunately for Jared Gordon, he is a bit chinny, and taking Dawson down will open him up to the excellent submission skills that Dawson possesses. So while both of them have good takedowns and terrible takedown defense, I believe that going to the ground hurts Gordon more than it helps him and he will do what he can to keep it standing while Dawson goes for the takedowns.

The cool thing these days is to pick Marlon Vera, but I just can’t get there. I don’t believe that Vera is anywhere near as good a fighter as Font, and I think if people were truly honest about his fight history – most would agree.

Vera has a total of two wins over notable opponents, an aging Frankie Edgar and a fluke victory over Sean O’Malley (and we don’t even really know if he is actually good yet). Beyond that his list of wins is filled with names that just aren’t that impressive. I get that he is a fan favorite, but for me the logic here is that Font is without question the better fighter, and baring getting caught with something, should cruise to a very simple decision victory. He is very much better defensively, much more accurate with his striking, and really the only area where he is worse than Vera is takedown defense – but Vera barely takes people to the ground anyway. Font for me, and I am shocked that I get him at only $8300.

As Frank wrote in his Rapid Fire Quick Picks article, it was a bit surprising to see the line come out the way that it did in this fight. I guess Vegas didn’t get caught up in the hype from the quick knockout Lainesse had in the Contender Series.

Gabe Green isn’t exactly finishing guys in the UFC however, so I believe that Lainesse will have numerous opportunities to let that power be displayed, and even if he doesn’t, will have three rounds to score at what I expect to be a pretty solid pace.

My only real cause for worry here would be cardio, and that isn’t because I know Lainesse has cardio issues, but rather because I know that Gabe Green can keep a monster pace for three rounds as he displayed against Daniel Rodriguez. The pace from that fight would be enough to make anyone feel tired. All things considered however, Lainesse makes all the sense in the world for me on this card for my DraftKings lineup.

Generally speaking you wouldn’t see me use two heavyweights as my pivot because most often one guy scores well and the other scores nothing. In this contest however, I just don’t believe it will play it out like that. These two are very strike heavy, but not exactly knockout artists – although Arlovski is only not that due to age at this point in his career.

I am expecting three rounds of moderate output from both fighters, and if there was to be a finish I think Collier by sub would be the shot in the dark. Neither fighter is very takedown focused however, and even if Collier was, Arlovski has fairly solid takedown defense at 78%. The implied probability based on Tapology voting is putting the Arlovski line at around -570 which would indicate he is much more heavily favored by the fans than Vegas.

Due to his lack of finishing ability however, I think Collier is actually a really solid play as well. There will be three rounds of scoring from either of them, with Arlovski being the pick that makes more sense, but Collier being the pick that has more upside. For me I will be playing whichever I have the room to fit on my roster salary wise.

One deviation this week from my normal routine will be that I will not be playing either of my pivot fighters in tournament contents. I think a finish is a long shot, and I just don’t see either fighter scoring enough to make it work for tournaments, even considering the leverage from ownership there would likely be from playing one of them.