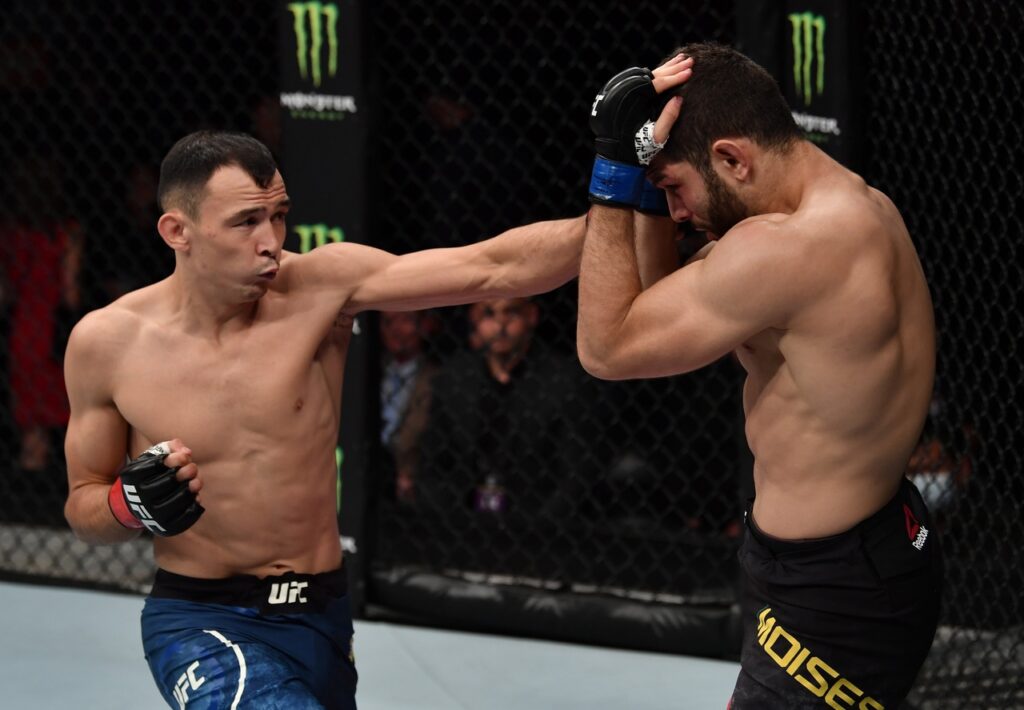 After a brutal week across the board for me at UFC 275, I am excited to rebound for UFC Austin. Ultimately, FanDuel did perform the best for me last week, but when the best of the group still puts out a losing effort, there really is nothing to celebrate. The only thing to do at this point is to put it all behind me, shake off any residual effect, and move confidently into the new week. So here goes.

This week is again loaded with underdog plays that could materialize into something great, so not exactly a great rebound card to build confidence. The one silver lining is that many of these fights are clear cut dog or pass situations for me just based on salary alone. The fights that aren’t that, I have a solid lean on who will be winning them. So the positivity is flowing.

Below you will see each of my favorite plays for the UFC Austin card, if you have any questions please don’t hesitate to comment below and I will do my best to answer them!

Despite falling short in some of his wrestling heavy matchups previously, and being placed firmly on my “do not roster” list, Kevin Holland is making a return for me in a big way this week. Not only do I believe that he will win this fight, but I also believe that Tim Means is an opponent wild and game enough to be dragged into a Kevin Holland type of fight.

The one question mark for me on this fight this week is if Tim Means wants the win bad enough to fight somewhat out of character with a takedown heavy approach. This has been proven to be the path to dispose of Kevin Holland easily, and Tim Means is enough of a veteran to know that would be his best approach. Regardless, his numbers don’t suggest that he will do that, only averaging less than one takedown per fifteen minutes.

Means should present Holland with an eclectic style that should be the perfect kind of fight for a showtime fighter like Kevin Holland on the feet. I expect plenty of strikes from both sides in a fight where Tim Means is likely to be pushing the pace. Holland has power in his hands, so there is knockout upside as well as submission upside if he can find Tim Means’ back.

This fight is a rebooking, and if I recall correctly, Cerrone was higher priced in the previous scheduling. This provides us with a great value to get him at a lower cost just a few bad tacos later. This fight is a classic veteran send off kind of fight, a true fight for the people that fell in love with the sport watching these two legends work.

Cerrone’s opponent, Joe Lauzon, will start fast – which is something Cerrone doesn’t care for – but should fall short in his efforts. I believe this will leave us with a fight where Cerrone dominates most of the rounds, and even potentially gets a finish.

Joe Lauzon is a warrior however, and finishing him is not easy, so it could also easily go the distance. Either way it goes however, these two will be putting on a show. That should produce plenty enough volume for a high score even in a decision win for FanDuel.

As much as I hate going against the LOTW, especially when it’s due to hit like it is now, I have to this week. Ismagulov is too technically solid for me to even entertain that he might lose this fight. I expect him to utilize his wrestling a bit more than usual here, especially early on in the fight when the power from Guram Kutateladze is at its most potent.

The power advantage is easily in favor of Kutateladze, but aside from that I believe Ismagulov is better everywhere – including the striking. Not so much offensively, where Kutateladze holds an advantage, but more so defensively where Ismagulov possesses a significant advantage with a 65% striking defense.

While I do expect Damir Ismagulov to dominate this fight on the ground and in the striking exchanges, I don’t believe that he will get a stop, because that just isn’t his game. My expectation is a decision, but at only $15, in a solid performance he should still return more than adequate value.

This might be my eyes doing the talking here instead of the analytics, but I think Kelley actually wins this fight. I have seen Yanez get rocked in previous contests, especially when they get turned into the war that Tony Kelley will want to push for. So the pick of using Kelley might be a little reliant on Yanez getting carried away in dangerous striking exchanges as well. If Yanez keeps distance, then this pick might fall flat a bit.

Regardless of the outcome, I do believe at worst, that this fight will be a decision. That makes me feel pretty safe being on the $9 side of it rather than the $22 side. These guys both will churn out a high pace striking contest that is perfect for the FanDuel scoring system.

After seeing the issues on the scale for Tony Kelley, I have moved to Roman Dolidze in this salary range. Another fighter I would potentially consider is Maria Oliveira if you can afford her.

After the week I had on UFC 275, I am mostly wishing myself luck. I suppose I could send some your way as well, but if I am running as short on it as I was last event I will consume every shred of luck I can muster.