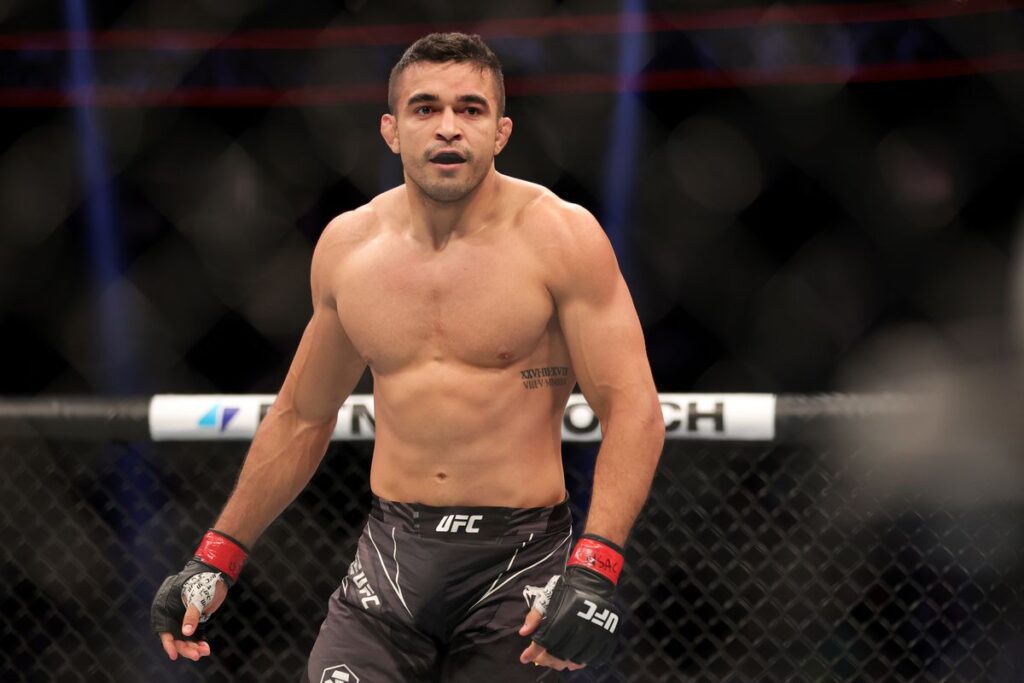 This week we have UFC 276, and what is probably the most stacked event we have seen in quite some time. There are numerous fights with very well known fighters, and that should draw out all of the casual DFS’ers. We did lose one fight on the card so far, which was Misha Tate versus Lauren Murphy. To be honest that isn’t much of a loss from a DFS perspective as neither of those women would have been in any of my lineups anyway. It does however reduce the number of fights which makes competitions tighter.

Below you will find my favorite plays for UFC 276, as well as some guidance as to what I am thinking about doing to fill out the remainder of my lineup. If you want any feedback on your entries please feel free to DM them to @WeWantPicks on Twitter, and someone will provide feedback to you as soon as they can.

So here we go with my favorite plays for UFC 276;

I would have to imagine that Volkanovski will be the highest owned fighter on the slate. He scores exceptionally well, even in decisions, which is what this fight will most likely be. After rewatching the first two fights between these two, I personally believe that if Holloway was going to win one it would have been the first one. Volkanovski has evolved as a striker so much since the first fight, and even since the second fight, that I just don’t see a world where Holloway gets the win.

Volkanovski has all of the tools to make this fight take place in the fashion he wants it to, and that will be the main issue for Holloway. Holloway used to have a significant advantage in the stand up, and while he still likely has the edge there, the gap has been narrowed quite a bit. Everywhere else this fight may go the advantage is clear to Volkanovski.

As I stated before, I do expect a decision, but something in me is saying this is the fight where Volkanovski finishes Holloway – who has always been a very hard guy to put away, only having one loss by finish in his entire UFC career. That one was a submission loss in his UFC debut to Dustin Poirier in 2012.

This is a riskier play here because you never know which version of Andre Muniz’s opponent, Uriah Hall, is going to show up. Hall has been wildly inconsistent throughout his UFC career, and Muniz has been on a submission run, even submitting the BJJ legend Jacare Souza.

Hall has never been submitted in the UFC however, so getting a submission on him would be another very impressive feat for Muniz. My expectation is that because of that fact, Muniz will be one of the lower owned fighters in the upper salary ranges. If he manages to make it happen, which I am fairly confident in that he does, he will score very well and give me some leverage over the field.

Because I tend to avoid multi-entry contests, I usually have my tournament play in all of my lineups, but this week I will be avoiding using Muniz in case and opt instead for someone with a safer floor in the event of a loss.

I decided to give two salary plays this week because for me it really depends on which contests I am entering as far as my salary spot on my lineup goes. For my cash contests it will be a co-main event stack for me, and I will pair Max Holloway with Volkanovski. For tournaments where you will need six winners to takedown, it will be Gabe Green as I believe he is the lowest salaried fighter that actually has a shot to win his fight.

Holloway should be self explanatory. His output is absolutely insane and even in his previous losses to Volkanovski he was scoring in the 40’s and 50’s. That is a fairly safe floor for only $7200 and then I am guaranteed to have the winner of this fight who will score well over 100 points in my opinion.

Gabe Green is a bit more of a shot in the dark, with him fighting highly marketable prospect Ian Garry. Thankfully marketability doesn’t dictate who wins a fist fight, and as long as Gabe Green can mitigate the size and reach difference, I believe he is the far more complete fighter. Garry has been rocked in his debut fight, and then taken down in his second UFC fight against Darien Weeks. Couple that with Gabe Green’s high pressure, output, and what appears to be a granite chin – and I have to say I like Gabe Green to pull off the upset.

To be clear, I am all but positive that Israel Adesanya wins this fight. Unfortunately Adesanya just isn’t a good scorer on DraftKings. He has low output and fights a very defensive fight, which leads to incredibly low scores even in five round dominant decisions. At $9400 that just isn’t something that I want on any of my lineups, not even for cash when there are so many better options coming in at a lower salary.

This fight is 100% dog or pass when it comes to DraftKings. Cannoiner will have value in a win, no matter how he gets it done, just because of his low salary. The same cannot be said for Adesanya, who would need a somewhat early finish to pay off his salary. Considering he only has four finishes in twelve fights, it is not likely that will happen. For that reason, and that reason alone, I will be avoiding Adesanya at all costs.

ROUND OUT THE LINEUP

For this event we have numerous big names available, and then some really exciting lesser known fighters as well. This will make lineup construction interesting. I really believe this week will come down to who has the right fighter over $9000. Almost everyone will, or should, have Alexander Volkanovski. The fighter in the lineup above that price point will make all the difference, or even the fighter below that price point if I decide to fade the over 9k range completely and load up on high 8K fighters.

One thing is for sure, there are not too many viable options below that $7400 price point. So almost every build this event is going to need to have some semblance of balance.

Last week’s cash only performance was better than losing money, but it sure doesn’t hit the same as winning a tournament entry. Good luck this week and make sure to enjoy the event!

Finally, make sure to join the We Want Picks DraftKings League!